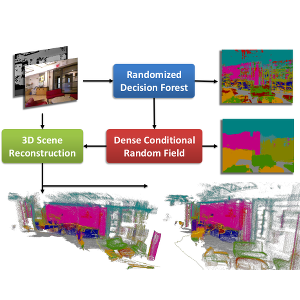 In this paper we propose an approach for global vehicle localization that combines visual odometry with map information from OpenStreetMaps to provide robust and accurate estimates for the vehicle’s position. The main contribution of this work comes from the incorporation of the map data as an additional cue into the observation model of a Monte Carlo Localization framework. The resulting approach is able to compensate for the drift that visual odometry accumulates over time, significantly improving localization quality. As our results indicate, the proposed approach outperforms current state-ofthe- art visual odometry approaches, indicating in parallel the potential that map data can bring to the global localization task. 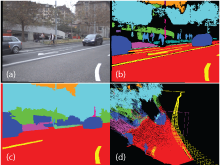 In this paper we propose a novel Conditional Random Field (CRF) formulation for the semantic scene labeling problem which is able to enforce temporal consistency between consecutive video frames and take advantage of the 3D scene geometry to improve segmentation quality. The main contribution of this work lies in the novel use of a 3D scene reconstruction as a means to temporally couple the individual image segmentations, allowing information flow from 3D geometry to the 2D image space. As our results show, the proposed framework outperforms state-of-the-art methods and opens a new perspective towards a tighter interplay of 2D and 3D information in the scene understanding problem. 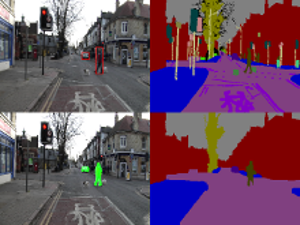 We propose a novel formulation for the scene labeling problem which is able to combine object detections with pixel-level information in a Conditional Random Field (CRF) framework. Since object detection and multi-class image labeling are mutually informative problems, pixel-wise segmentation can benefit from powerful object detectors and vice versa. The main contribution of the current work lies in the incorporation of topdown object segmentations as generalized robust P N potentials into the CRF formulation. These potentials present a principled manner to convey soft object segmentations into a unified energy minimization framework, enabling joint optimization and thus mutual benefit for both problems. As our results show, the proposed approach outperforms the state-of-the-art methods on the categories for which object detections are available. Quantitative and qualitative experiments show the effectiveness of the proposed method. 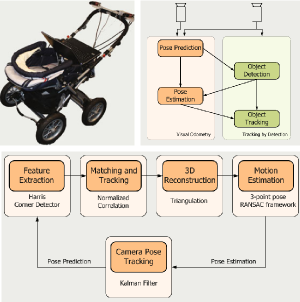 In this paper, we present a real-time vision-based multiperson tracking system working in crowded urban environments. Our approach combines stereo visual odometry estimation, HOG pedestrian detection, and multi-hypothesis tracking-by-detection to a robust tracking framework that runs on a single laptop with a CUDA-enabled graphics card. Through shifting the expensive computations to the GPU and making extensive use of scene geometry constraints we could build up a mobile system that runs with 10Hz. We experimentally demonstrate on several challenging sequences that our approach achieves competitive tracking performance.