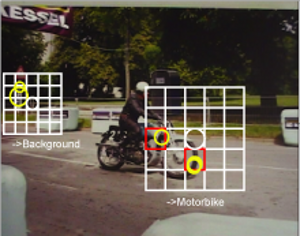 We present a novel approach to automatically find spatial configurations of local features occurring frequently on instances of a given object class, and rarely on the background. The approach is based on computationally effi- cient data mining techniques and can find frequent con- figurations among tens of thousands of candidates within seconds. Based on the mined configurations we develop a method to select features which have high probability of lying on previously unseen instances of the object class. The technique is meant as an intermediate processing layer to filter the large amount of clutter features returned by lowlevel feature extraction, and hence to facilitate the tasks of higher-level processing stages such as object detection.