Analyzing Contour and Appearance Based Methods for Object Categorization 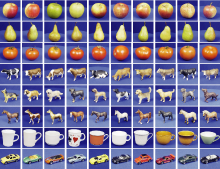 Object recognition has reached a level where we can identify a large number of previously seen and known objects. However, the more challenging and important task of categorizing previously unseen objects remains largely unsolved. Traditionally, contour and shape based methods are regarded most adequate for handling the generalization requirements needed for this task. Appearance based methods, on the other hand, have been successful in object identification and detection scenarios. Today little work is done to systematically compare existing methods and characterize their relative capabilities for categorizing objects. In order to compare different methods we present a new database specifically tailored to the task of object categorization. It contains high-resolution color images of 80 objects from 8 different categories, for a total of 3280 images. It is used to analyze the performance of several appearance and contour based methods. The best categorization result is obtained by an appropriate combination of different methods.