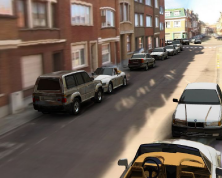 3D city modeling using computer vision is very chal- lenging. A typical city contains objects which are a night- mare for some vision algorithms, while other algorithms have been designed to identify exactly these parts but, in their turn, suffer from other weaknesses which limit their application. For instance, moving cars with metallic sur- faces can degrade the results of a 3D city reconstruction algorithm which is primarily based on the assumption of a static scene with diffuse reflection properties. On the other hand, a specialized object recognition algorithm could be able to detect cars, but also yields too many false positives without the availability of additional scene knowledge. In this paper, the design of a cognitive loop which intertwines both aforementioned algorithms is demonstrated for 3D city modeling, proving that the whole can be much more than the simple sum of its parts. A cognitive loop is the mutual trans- fer of higher knowledge between algorithms, which enables the combination of algorithms to overcome the weaknesses of any single algorithm. We demonstrate the promise of this approach on a real-world city modeling task using video data recorded by a survey vehicle. Our results show that the cognitive combination of algorithms delivers convincing city models which improve upon the degree of realism that is possible from a purely reconstruction-based approach.