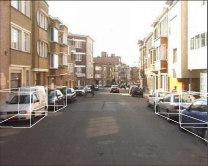 This paper presents a practical system for vision-based traffic scene analysis from a moving vehicle based on a cognitive feedback loop which in- tegrates real-time geometry estimation with appearance-based object detection. We demonstrate how those two components can benefit from each other’s con- tinuous input and how the transferred knowledge can be used to improve scene analysis. Thus, scene interpretation is not left as a matter of logical reasoning, but is instead addressed by the repeated interaction and consistency checks between different levels and modes of visual processing. As our results show, the proposed tight integration significantly increases recognition performance, as well as over- all system robustness. In addition, it enables the construction of novel capabilities such as the accurate 3D estimation of object locations and orientations and their temporal integration in a world coordinate frame. The system is evaluated on a challenging real-world car detection task in an urban scenario.