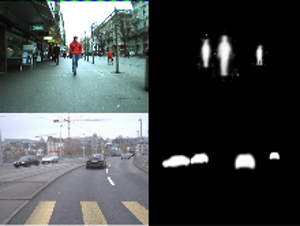 Visual pedestrian/car detection is very important for mobile robotics in complex outdoor scenarios. In this paper, we propose two improvements to the popular Hough Forest object detection framework. We show how this framework can be extended to efficiently infer precise probabilistic segmentations for the object hypotheses and how those segmentations can be used to improve the final hypothesis selection. Our approach benefits from the dense sampling of a Hough Forest detector, which results in qualitatively better segmentations than previous voting based methods. We show that, compared to previous approaches, the dense feature sampling necessitates several adaptations to the segmentation framework and propose an improved formulation. In addition, we propose an efficient cascaded voting scheme that significantly reduces the effort of the Hough voting stage without loss in accuracy. We quantitatively evaluate our approach on several challenging sequences, reaching stateof-the-art performance and showing the effectiveness of the proposed framework.