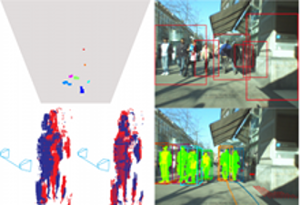 Classical tracking-by-detection approaches require a robust object detector that needs to be executed in each frame. However the detector is typically the most computationally expensive component, especially if more than one object class needs to be detected. In this paper we investigate how the usage of the object detector can be reduced by using stereo range data for following detected objects over time. To this end we propose a hybrid tracking framework consisting of a stereo based ICP (Iterative Closest Point) tracker and a high-level multi-hypothesis tracker. Initiated by a detector response, the ICP tracker follows individual pedestrians over time using just the raw depth information. Its output is then fed into the high-level tracker that is responsible for solving long-term data association and occlusion handling. In addition, we propose to constrain the detector to run only on some small regions of interest (ROIs) that are extracted from a 3D depth based occupancy map of the scene. The ROIs are tracked over time and only newly appearing ROIs are evaluated by the detector. We present experiments on real stereo sequences recorded from a moving camera setup in urban scenarios and show that our proposed approach achieves state of the art performance