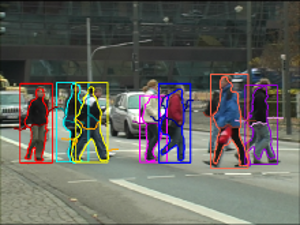 In this paper, we address the problem of segmentationbased tracking of multiple articulated persons. We propose two improvements to current level-set tracking formulations. The first is a localized appearance model that uses additional level-sets in order to enforce a hierarchical subdivision of the object shape into multiple connected regions with distinct appearance models. The second is a novel mechanism to include detailed object shape information in the form of a per-pixel figure/ground probability map obtained from an object detection process. Both contributions are seamlessly integrated into the level-set framework. Together, they considerably improve the accuracy of the tracked segmentations. We experimentally evaluate our proposed approach on two challenging sequences and demonstrate its good performance in practice.