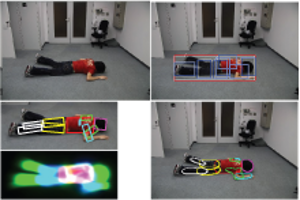 This paper proposes a pipeline for lying pose recognition from single images, which is designed for health-care robots to find fallen people. We firstly detect object bounding boxes by a mixture of viewpoint-specific part based model detectors and later estimate a detailed configuration of body parts on the detected regions by a finer tree-structured model. Moreover, we exploit the information provided by detection to infer a reasonable limb prior for the pose estimation stage. Additional robustness is achieved by integrating a viewpointspecific foreground segmentation into the detection and body pose estimation stages. This step yields a refinement of detection scores and a better color model to initialize pose estimation. We apply our proposed approach to challenging data sets of fallen people in different scenarios. Our quantitative and qualitative results demonstrate that the part-based model significantly outperforms a holistic model based on same feature type for lying pose detection. Moreover, our system offers a reasonable estimation for the body configuration of varying lying poses.