Toward Spontaneous Interaction with the Perceptive Workbench 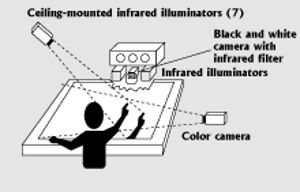 Until now, we have interacted with computers mostly by using wire-based devices. Typically, the wires limit the distance of movement and inhibit freedom of orientation. In addition, most interactions are indirect. The user moves a device as an analog for the action created in the display space. We envision an untethered interface that accepts gestures directly and can accept any objects we choose as interactors. We discuss methods for producing more seamless interaction between the physical and virtual environments through the Perceptive Workbench. We applied the system to an augmented reality game and a terrain navigating system. The Perceptive Workbench can reconstruct 3D virtual representations of previously unseen real-world objects placed on its surface. In addition, the Perceptive Workbench identifies and tracks such objects as they are manipulated on the desk's surface and allows the user to interact with the augmented environment through 2D and 3D gestures