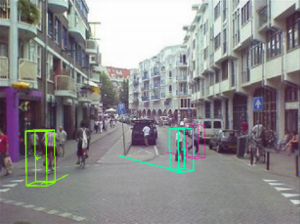 We present a novel approach for multi-object tracking which considers object detection and spacetime trajectory estimation as a coupled optimization problem. Our approach is formulated in a Minimum Description Length hypothesis selection framework, which allows our system to recover from mismatches and temporarily lost tracks. Building upon a state-of-the-art object detector, it performs multi-view/multi-category object recognition to detect cars and pedestrians in the input images. The 2D object detections are checked for their consistency with (automatically estimated) scene geometry and are converted to 3D observations, which are accumulated in a world coordinate frame. A subsequent trajectory estimation module analyzes the resulting 3D observations to find physically plausible spacetime trajectories. Tracking is achieved by performing model selection after every frame. At each time instant, our approach searches for the globally optimal set of spacetime trajectories which provides the best explanation for the current image and for all evidence collected so far, while satisfying the constraints that no two objects may occupy the same physical space, nor explain the same image pixels at any point in time. Successful trajectory hypotheses are then fed back to guide object detection in future frames. The optimization procedure is kept efficient through incremental computation and conservative hypothesis pruning. We evaluate our approach on several challenging video sequences and demonstrate its performance on both a surveillance-type scenario and a scenario where the input videos are taken from inside a moving vehicle passing through crowded city areas.