The Perceptive Workbench: Toward Spontaneous Interaction in Semi-Immersive Virtual Environments 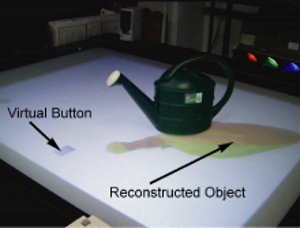 The Perceptive Workbench enables a spontaneous, natural, and unimpeded interface between the physical and virtual worlds. It uses vision-based methods for interaction that eliminate the need for wired input devices and wired tracking. Objects are recognized and tracked when placed on the display surface. Through the use of multiple light sources, the objectÕs 3D shape can be captured and inserted into the virtual interface. This ability permits spontaneity since either preloaded objects or those objects selected on the spot by the user can become physical icons. Integrated into the same vision-based interface is the ability to identify 3D hand position, pointing direction, and sweeping arm gestures. Such gestures can enhance selection, manipulation, and navigation tasks. In this paper, the Perceptive Workbench is used for augmented reality gaming and terrain navigation applications, which demonstrate the utility and capability of the interface.