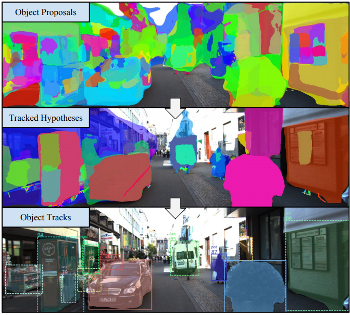 The most common paradigm for vision-based multi-object tracking is tracking-by-detection, due to the availability of reliable detectors for several important object categories such as cars and pedestrians. However, future mobile systems will need a capability to cope with rich human-made environments, in which obtaining detectors for every possible object category would be infeasible. In this paper, we propose a model-free multi-object tracking approach that uses a category-agnostic image segmentation method to track objects. We present an efficient segmentation mask-based tracker which associates pixel-precise masks reported by the segmentation. Our approach can utilize semantic information whenever it is available for classifying objects at the track level, while retaining the capability to track generic unknown objects in the absence of such information. We demonstrate experimentally that our approach achieves performance comparable to state-of-the-art tracking-by-detection methods for popular object categories such as cars and pedestrians. Additionally, we show that the proposed method can discover and robustly track a large variety of other objects. 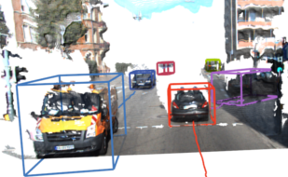 Tracking in urban street scenes plays a central role in autonomous systems such as self-driving cars. Most of the current vision-based tracking methods perform tracking in the image domain. Other approaches, e.g. based on LIDAR and radar, track purely in 3D. While some vision-based tracking methods invoke 3D information in parts of their pipeline, and some 3D-based methods utilize image-based information in components of their approach, we propose to use image- and world-space information jointly throughout our method. We present our tracking pipeline as a 3D extension of image-based tracking. From enhancing the detections with 3D measurements to the reported positions of every tracked object, we use world- space 3D information at every stage of processing. We accomplish this by our novel coupled 2D-3D Kalman filter, combined with a conceptually clean and extendable hypothesize-and-select framework. Our approach matches the current state-of-the-art on the official KITTI benchmark, which performs evaluation in the 2D image domain only. Further experiments show significant improvements in 3D localization precision by enabling our coupled 2D-3D tracking. 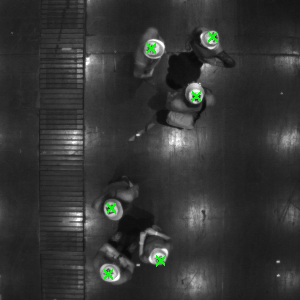 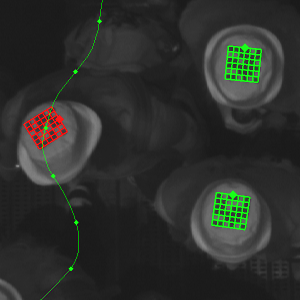 We present a system to conduct laboratory experiments with thousands of pedestrians. Each participant is equipped with an individual marker to enable us to perform precise tracking and identification. We propose a novel rotation invariant marker design which guarantees a minimal Hamming distance between all used codes. This increases the robustness of pedestrian identification. We present an algorithm to detect these markers, and to track them through a camera network. With our system we are able to capture the movement of the participants in great detail, resulting in precise trajectories for thousands of pedestrians. The acquired data is of great interest in the field of pedestrian dynamics. It can also potentially help to improve multi-target tracking approaches, by allowing better insights into the behaviour of crowds. 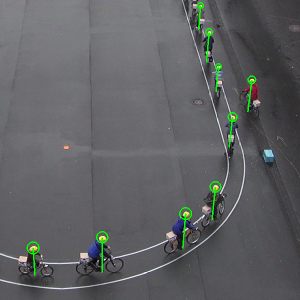 Traffic research has reached a point where trajectories are available for microscopic analysis. The next step will be trajectories which are connected to human factors, i.e information about the agent. The first step in pedestrian dynamics has been done using video recordings to generate precise trajectories. We go one step further and present two experiments for which ID markers are used to produce individualized trajectories: a large-scale experiment on pedestrian dynamics and an experiment on single-file bicycle traffic. The camera set-up has to be carefully chosen when using ID markers. It has to facilitate reading out the markers, while at the same time being able to capture the whole experiment. We propose two set-ups to address this problem and report on experiments conducted with these set-ups.


Universalities in Fundamental Diagrams of Cars, Bicycles and Pedestrians

Since the pioneering work of Greenshields the fundamental diagram is used to characterize and describe the performance of traffic systems. During the last years the discussion and growing data base revealed the influence of human factors, traffic types or ways of measurements on this relation. The manifoldness of influences is important and relevant for applications but moves the discussion away from the main feature characterizing the transport properties of traffic systems. We focus again on the main feature by comparing the fundamental diagram of cars, bicycles and pedestrians moving in a row in a course with periodic boundaries. The underlying data are collected by three experiments, performed under well controlled laboratory conditions. In all experiments the setup in combination with technical equipment or methods of computer vision allowed to determine the trajectories with high precision. The trajectories visualized by space-time diagrams show three different states of motion (free flow state, jammed state and stop-and-go waves) in all these systems. Obviously the values of speed, density and flow of these three systems cover different ranges. However, after a simple rescaling of the velocity by the free speed and of the density by the length of the agents the fundamental diagrams conform regarding the position and height of the capacity. This indicates that the similarities between the systems go deeper than expected and offers the possibility of a universal model for heterogeneous traffic systems.

The relation between flow and density is an essential quantitative characteristic to describe the efficiency of traffic systems. We have performed experiments with single-file motion of bicycles and compared the results with previous studies for car and pedestrian motion in similar setups. In the space–time diagrams we observe three different states of motion (free flow state, jammed state and stop-and-go waves) in all these systems. Despite their obvious differences they are described by a universal fundamental diagram after proper rescaling of space and time which takes into account the size and free velocity of the three kinds of agents. This indicates that the similarities between the systems go deeper than expected.